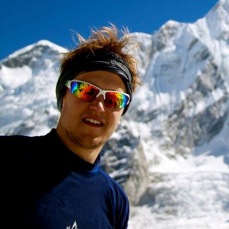 How did you get here?

While I was born in South Africa, I’ve been brought up in the South of England. I studied Engineering at Bristol and then Engineering Management at Duke, North Carolina before starting a career with BP. They sent me to the Shetlands, London and most recently South Korea, where I’ve been working on the construction phase of a major new oil & gas platform.

How did you get into cycling?

I’ve never been an “endurance” athlete. Unfortunately, years of schoolboy Rugby and Hockey have taken their toll on my knees. By my third year at Bristol University, after 2 knee operations, I had to make a change. No more running allowed! I became a rower. It was my friend Henry that first got me on a road bike to commute down to the river Avon for our 6am rowing sessions. Since then, I’ve been increasingly hooked on the sport and have done several long distance trips including from Shetland to Land’s End and London to Valencia.

Why are you cycling around the world?

Almost five years into my career, I had had some great opportunities, experiences and achievements at BP but I reached a point where I needed to make some changes to the plan. It dawned on me that I’m currently single, changing jobs and love cycling and I’d kick myself one day if I didn’t take the opportunity to do a big ride. Around the world seemed to me to be the biggest of big rides. I didn’t want to turn it into a multi-year epic. I’m not lost (yet) and don’t need to find myself. I planned a direct route around the northern hemisphere, where there’s the greatest landmass. This is not a career break; it’s a challenge, it’s an adventure and it’s an opportunity to stretch myself and truly become a man of the world.

While I’ve seen the impressive rhino in the wild before, it was the emotional experience while viewing the series of photos by Brent Stirton in the 2012 Wildlife Photographer of the Year exhibition at the Natural History Museum, that really struck a nerve. It saddens me that humans can be so cruel to such a magnificent and powerful creature. What’s more, most of the world understands that there is no proven medicinal benefit to Rhino horn. It’s just keratin! How can we live in such an advanced and globally connected world and not be doing a better job at sharing knowledge and spreading awareness to put an end to the needless demise of such an iconic animal? This is my opportunity to do my bit.

What worries you most about cycling with Will?

He loves drafting! Therefore, my main concern is that it’ll be like cycling on my own as I may never see him. Actually the truth is that although I was never in doubt, the planning phase has made it clear that he’s the perfect companion for this little adventure. I’m “stoked” about the prospect of 7 months on the road with him. (This may read very differently by the time we reach Miami…)

2 thoughts on “About Johan”